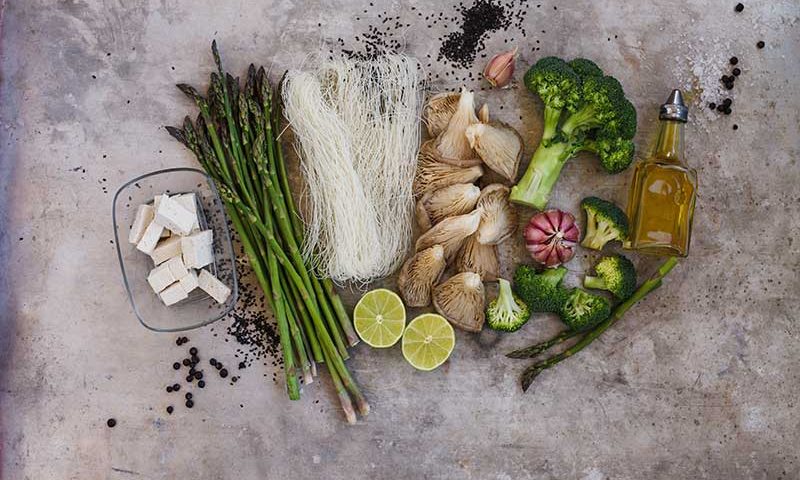 According to a recent study conducted by the Vegetarian Times, there are more than one-million adults in the States that identify as ‘vegan’ – of course, some of those are and always have been vegan, while others are adopting veganism as one of the latest food trends. There are also numerous celebrities that follow a strict vegan lifestyle, including Natalie Portman, Ellen Page, and Jared Leto, to name a few – as well as fitness gurus and teachers – which may have influenced the rise in veganism.

Most that adopt a vegan diet swear that it helps both mental and physical health, as well as beauty, looking younger and, possibly, living much longer. The Vegan Society has even declared November World Vegan Month to encourage people to try their hand at the vegan lifestyle for an entire month and feel its numerous benefits. But despite veganism’s rising popularity, the age-old question remains: Is a vegan diet good for you and, if so, what about a vegan diet makes it good for your health?

Thanks to the abundance of fresh produce you consume as part of a vegan diet, it is said that vegan diets help to boost energy levels and keep you feeling alert throughout the day. Consequently, you will feel more engaged, focused and, quite possibly, may even feel more productive in work and life.

Animal products such as red meat and cheese are a huge source of saturated fat which, when cut out, can have quickly-noticeable slimming benefits. You may lose a few pounds in the first few weeks alone.

While many doctors insist that we should be eating up to ten portions of fruit and veg every day, the widely accepted and, therefore, adhered to figure is five portions. As a vegan, fruit, and veg are the staples of almost every meal, which means you’ll easily be able to consume your five-a-day every day. As a result, your diet will be rich in essential nutrients to keep you looking and feeling your best.

Even though veganism has some pitfalls in the form of vitamin deficiency, which means you need to keep a keen eye on your vitamin B, calcium, iron and zinc intake, it also has numerous physical health benefits. Research shows that those following a vegan or vegetarian diet are more likely to have lower blood pressure, reduced rates of developing diabetes, lower cholesterol, and a lower BMI. Such research proves that it’s possible to lead a much healthier lifestyle when you choose a vegan diet.

Often, when you think of sports and athletics, you imagine athletes chowing down of platefuls of meat to get their protein fix, but that’s not always the case. American former track and field athlete Carl Lewis and ultramarathoner Scott Jurek are both vegan and have dominated in their chosen sports; Jurek even has a best-selling book titled Eat & Run (2012). You can be both vegan and athletic.

Studies show that those that do not eat red meat, typically, have much less body odor as well as better smelling breath. If you suffer from bad smells, you might want to consider a vegan diet.

From the land required for farming to the transportation of animals and food products, the production of animal products is bad news for the environment. Deforestation for cattle grazing land and pollution through transportation and food production are just some of the rising concerns surrounding animal products. By choosing veganism, you will have much less of a negative impact on the environment.

Fruit and vegetables are full of vitamins A and E, both of which are essential for hair, nail and skin health. When you choose veganism, you’re choosing strong nails, shiny hair, and glowing skin.

How to Become Vegan

Becoming vegan is an enormous undertaking and a huge lifestyle shift; for vegan success, it’s important you take your time and do it right. Per the Vegan Society’s suggestions, explore our tips:

Many that seek veganism assume all it takes is a flick of the switch and, suddenly, you don’t need to eat animal products anymore, but that’s incorrect. You don’t need to change everything at once. While you may well be someone that can cut out animal products with ease, it’s better to cut down gradually to ensure your body doesn’t experience shock, which could well make you ill. To begin, change a few of your weekly meals to vegan meals and, gradually, increase the presence of veganism in your diet. Most animal products have tasty vegan alternatives so spend time exploring your local supermarket to find products that you will enjoy tucking into most evenings, and that will keep you fuller for longer.

Remember, becoming vegan doesn’t automatically fix any downfalls in your diet and make you a health guru. If you’re still regularly tucking into junk food, you’re going to experience few health benefits. Instead, make sure your diet is balanced and that you’re getting all the nutrients you need for proper function; even if it means looking to multi vitamins for B vitamins and iron, for instance. Your diet should include carbohydrates, protein, unsaturated fats, fiber and vitamins, and minerals. If you’re unsure how to implement a vegan diet, look to online experts such as Kristina Carillo-Bucaram.

Adopting a new diet means trying new flavors and recipes, which makes turning vegan the perfect time to explore your creativity and flair for cooking and to create delicious combos for breakfast, lunch, and dinner. There is an enormous amount of vegan-friendly food out there; you just need to find it.

Not sure you’re ready to cook vegan food at home? Visit vegan-friendly restaurants for ideas.

Understanding how veganism works won’t happen overnight; you need to spend time exploring the vegan lifestyle, which you can do through trial and error and by reading renowned resources such as The Oh She Glows Cookbook (2014) by Angela Liddon and Becoming Vegan (1984) by Brenda Davis. If you’re choosing a vegan lifestyle rather than just a vegan diet, you must strictly follow all its principles.

Becoming vegan is a challenge and, at times, you might want to quit. However, when negative feelings arise, always think back to why you chose to become vegan – whether for a healthier lifestyle, to protect animals, or to help the environment – and, remembering how far you’ve come, keep at it. As with anything new, there will be challenges, but the long-term benefits will outweigh any pitfalls.

Research suggests that, if pursued correctly, veganism has a roster of health benefits. By following our suggestions to becoming vegan, you can pave the way for a healthier and happier you. Before pursuing veganism, always consult your doctor to ensure you’re physically prepared to adopt a vegan diet.