The best yoga spots in the US

Bhagavad-Gita and its influence on Yoga Philosophy 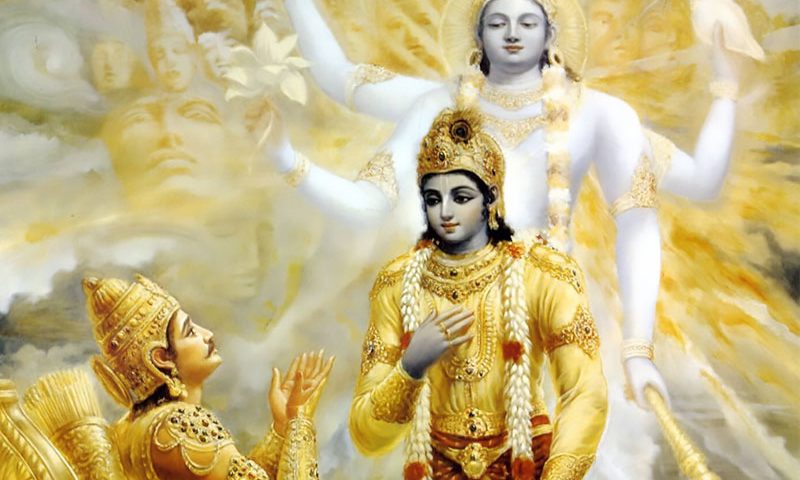 Still one of the most influential yoga texts in the world, the Bhagavad-Gita is still popular to this day. Presenting life from a practical viewpoint, the ancient text marks a key point in the evolution of yoga. As well as explaining the meaning of life and each person’s place in the world, the text explores how to develop yourself spiritually; this has caused many great thinkers such as Mahatma Gandhi, Henry David Thoreau, and Nicola Tesla to be influenced by the historic text.

Commonly referred to as just the Gita, Bhagavad-Gita is seen as being one of the most influential spiritual texts in the whole of India. While the text comprises of a mighty 700 verses alone, the Gita was designed to form part of the magnificent text known as the  Mahabharata. To put it simply, the Gita is believed to be a record of a conversation between Prince Arjuna and his friend Sri Krishna. Set around the time of a great war, the text starts off with Prince Arjuna asking Krishna for guidance. At the back of his mind, the prince knows that to go forward with the battle then family and friends will end up being lost, consequently resulting in him being faced with a crisis between his personal life and his ethics and a leader. The conversation later leads to him and Krishna talking about the nature of the soul, each person’s meaning of life, and the path of yoga.

Although we are sure that the Bhagavad Gita was composed around 400 BCE, it still remains unclear who wrote the famous text. Traditionally, the credit is believed to go to a man called Vyasa, who is actually thought to be more of a spiritual leader than a historical figure. While today the Gita is a small part of the texts included in the Mahabharata, it was believed to be originally written as an independent document. The nature of the story seems to differ from the other texts included in the collection, which all have the same nature.

Written during a period of social change in India, the Bhagavad Gita is thought to reflect the higher trade activity, increased urbanization and a varsity of social conflict. Focussing primarily on one’s place in society, the traditional text is believed to encourage thoughts and actions of calmness, serenity, and information about how to integrate important social and spiritual values into the modern life. Though the Gita is a spiritual text, it boasts the ability to be interpreted on many different levels including moral and practical, too; thus why it is still so well-loved today, even in Western culture.

Popular still to this day, the Bhagavad Gita encourages and explores the original yoga practice. Often, yogis feel that flicking through the Gita allows them to connect with the meaning behind the art on a deeper level, honoring past yoga gurus by carrying out the craft in the correct manner. Whilst encouraging individuals to live a life of inner peace and serenity, the Bhagavad Gita is well-loved for not instructing people to turn into a glorified hermit; unlike some of the other historical texts containing yoga teachings. To many peoples delight, the Gita informs us that this is not necessary and that one’s inner happiness is the most important thing; advising us that the simplest path to achieving the divine is by practicing Karma-Yoga. After getting to grips with a basic knowledge of Karma Yoga, individuals can move onto working on meditation, which is believed by Krishna to help develop them into a better person. One of the many reasons that they Gita is still so popular today, is how simple it is to integrate the teachings into everyday life, without having to focus your entire existence on the spiritual beliefs. Focussing primarily on yogic philosophies such as reincarnation, karma, Maya and moksha, the Gita teaches us how to apply these philosophies to normal life, ultimately helping us to achieve eternal happiness.

While all this information is interesting, why exactly is the Bhagavad-Gita so popular still in yoga today? Translating to ‘linking with god’, the word yoga is thought to imply that the practice should involve some spiritual element. In the third chapter of the Gita, Krishna explains two different forms of spirituality that one can link with yoga. These are referred to as the active life and the contemplative one.

Back when the Gita was composed, spiritualists often believed that a life of spirituality could only be reached by losing the burden of one’s active life. In correspondence to this belief, the Gita was intended to teach society that this was actually not the case. In the text, Krishna teaches the prince to not worry about ridding himself of active life but to adapt his actions in an attempt to combine the two. Practicing yoga with a contemplative approach can make the process more difficult than practicing with an active one, seeing as it is a lot harder to detach yourself from everyday objects to allow the mind to focus. As time has passed, the story has taught individuals that while contemplative life is important, active life holds the practicality to help one succeed in the ever-changing world; ultimately rewarding one with a life of serenity and happiness. To put it simply, the Bhagavad-Gita is still popular within the practice of yoga today due to the connections it boasts with our spiritual ancestors. A connection with God is remained by including teachings from the ancient text in classes and is believed to help students connect with the practice on a much deeper level.

Whether you choose to focus your whole lifestyle on the ancient beliefs behind the practice of yoga, or you just enjoy putting on your yoga gear in your spare time to encourage serenity and inner-peace, there is no qualms that the Bhagavad-Gita holds some interesting points about the true meaning of birth, death and everything in between.