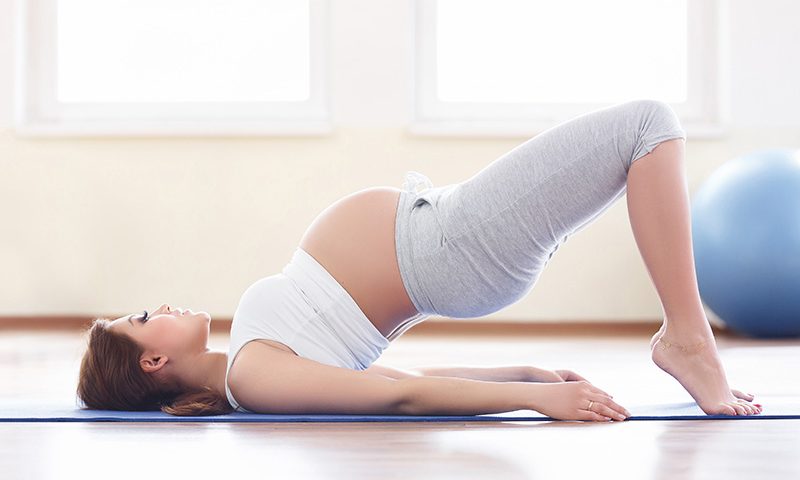 Yoga is a fantastic way to control your breathing, relieve stress and, ultimately, boost relaxation – all of which are beneficial during pregnancy. Better still, you can take what you’ve learned from yoga during pregnancy and apply it to your daily routine when motherhood comes, too. Pregnancy is emotional and, sometimes, stressful and, therefore, a challenging period for your mind and body. Rather than bingeing on high-fat or sugary foods when times get tough, choose 60-minutes of yoga.

According to a recent study that observed 25 healthy pregnant women in their third trimester during one-to-one yoga classes – each of which consisted of 26 different yoga poses – typically, practicing yoga during pregnancy does not affect pregnancy. For instance, none of the women experienced signs of decreased fetal movement, contractions, leakage or vaginal bleeding following their yoga sessions, and during the session, none of the women showed signs of increased heart rates or blood pressure which could have been deemed unhealthy or unsafe to them or their baby. The poses practiced during the sessions avoided inversions and focused on standing poses and stretching. Although, do note that everyone’s tolerance is different and, while pregnant, you should practice yoga with extreme care.

There are dozens of types of yoga practiced every day around the world, but some are better suited to pregnancy than others. Below, find out about the best, safest types of yoga for pregnant women.

As well as improving physical strength and posture – which may be a problem during pregnancy – Hatha yoga promotes steady breathing, increased awareness and, ultimately, relaxation, which makes it perfect for pregnancy. When your emotions are all over the place, it’s important to find balance.

Like Hatha yoga, Ananda yoga is a both physical and spiritual – it combines fitness and meditation. Better still, Ananda yoga is a prolonged and gentle form of yoga which allows you to meditate using different areas of the body. After a short Ananda yoga session, you should feel completely relaxed.

As the name suggests, Integral yoga integrates numerous types of yoga to create a style of yoga that combines physicality with breathing, chanting, and meditation – it is a very flexible form of yoga with an almost endless stream of poses suitable for different stages of pregnancy. For instance, early on in your pregnancy, you can still challenge yourself but then slow things down as your body changes.

If it’s the physicality of yoga you love rather than the spirituality of the practice, Iyengar yoga is an excellent style that focuses on the poses above breathing and meditation. Iyengar yoga is very accessible, too, as it uses a variety of props, including wooden blocks, benches, and straps – ideal for support if you’re pregnant. Some poses can be challenging so carefully consider which are suitable.

Sitting at ‘moderate’ on the difficulty spectrum, Viniyoga falls somewhere between Iyengar yoga and Power yoga, which is a very physical and precise style – as detailed below. Viniyoga combines mindful breathing and physically demanding postures for both fitness and meditation – after a Viniyoga session, you will feel completely relaxed but also exhausted. Always take it slow during pregnancy.

More than just yoga, Sivananda yoga is a lifestyle. As well as focusing on fitness and meditation, Sivananda encourages a vegetarian diet, positive thinking, prayer, and breathing exercises. While we don’t recommend turning vegetarian while pregnant, there are several principles you can adopt from Sivananda for a healthy, comfortable and still active pregnancy. Take time to yourself to relax.

One of the most spiritual forms of yoga, Bhakti yoga combines chanting and meditation with exercise to improve concentration. If you’re spiritual, Bhakti can help you to connect with the ‘divine spirit’. If it’s peace and tranquillity that attracts you to yoga, Bhakti yoga is an excellent release for stress.

Types of Yoga to Avoid During Pregnancy

As with everything during pregnancy, there are certain kinds of yoga and yoga poses you should avoid during pregnancy; especially during the last trimester in which you are very vulnerable to injury. For instance, yoga poses that require inversion will press your baby into your lungs which may make breathing difficult. Similarly, you should avoid any poses or types of yoga where you need to lie on your back or abdomen. If you need to practice yoga during your final trimester, you should avoid twists, jumping and breathing techniques that require you to hold your breath, as all these could be dangerous when you’re heavily pregnant. For instance, twists will push on your internal organs.

Below, explore five types of yoga you should avoid during pregnancy.

While Kundalini yoga is a fantastic way to release energy and keep fit earlier in pregnancy, it is a very active and fast-paced style of yoga and will make you feel tired quickly and encourage you to sweat. You should try to avoid excessive sweating during pregnancy as when you sweat you lose nutrients and you need to retain all the nutrients you can during pregnancy, so you and your baby stay healthy.

Widely regarded as the most intense style of Hatha yoga, Power yoga comprises of sequences, which means poses must be performed quickly after one another; giving you little time to rest. Power yoga is a detoxifier which means it will make you excessively sweat which, as mentioned, you should avoid.

It may seem obvious; nevertheless, we must emphasize that Aerial yoga, in which poses take place in the air, should be avoided during pregnancy. Aerial yoga can cause dizziness, falls, panic attacks and nausea which, in severe cases, may result in miscarriage. Never practice aerial yoga while pregnant.

Also known as Hot yoga, Bikram yoga is very dangerous for pregnant women. Hot yoga takes place in a room heated to around 40°C, which will make you sweat profusely. Bikram yoga has been found to cause high blood pressure, heat exhaustion and, in severe cases, premature birth and miscarriage.

While not completely out of the question, Dharma Yoga includes twists, inversions, holding your breath and back bends – all of which you should avoid during pregnancy. Instead, opt for Hatha Yoga.

Ultimately, taking our advice on board, it’s down to you to decide what you can and can’t manage during pregnancy. Do not push yourself too hard and make sure you’re comfortable. When pregnant, you need to take it slow and, importantly, relax – even if you were a yogi before you fell pregnant, it doesn’t mean you’ll be able to keep up your yoga routine while pregnant. If you’re unsure about yoga during pregnancy, visit a specialist pregnancy yoga class in your local area – that way, you can rest assured that everything you’re doing is safe. Better still, take your other half and spend time together.